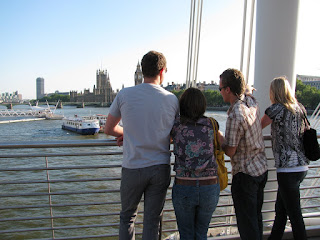 After flying 5,000 miles across the Atlantic, we arrived at the Heathrow airport. I love coming back to my second home in England. Being in charge of planning this trip, I admit to being a little anxious. Two guys should be waiting at the airport exit to pick us up. But would they show up?

I was familiar with planning an overseas tour, this being our 5th one. We waited about 15 minutes by the doors, smelling the petrol and damp city air as the automatic doors opened and closed. It seemed like an hour had gone by when finally the pastor and elder from a London church found our travel-weary group. They piled our luggage and gear in two minivans and drove us down the narrow roads to a small village in London.

As we were driven around, we heard the church’s story. The pastor and his family had left Africa to plant a church in London. They described how difficult it was to leave everything, and suddenly my 8-hour journey and jet-lag seemed minuscule. They had given up much. Though the size of the church wouldn’t put them in the paper, and it didn’t have the sound and lights of a mega-church production, I learned so much from this generous church and pastor’s family. They were faithful. They simply did whatever it took to keep it alive and growing.

I was reminded of Philippians 3:12-14 that says: “I’m not saying that I have this all together, that I have it made. But I am well on my way, reaching out for Christ, who has so wondrously reached out for me. Friends, don’t get me wrong: By no means do I count myself an expert in all of this, but I’ve got my eye on the goal, where God is beckoning us onward—to Jesus. I’m off and running, and I’m not turning back.”

This family did not turn back as they left the familiar and headed to England to start a church.

The weekend in London for me went by fast. We picked up our 85-year-old 2nd cousin to bring her to our concert Saturday night. She has lived her whole life in a nearby suburb. Such a highlight for me to have relatives from my British mum’s side of the family there!

Our talented Welsh friend drove in from Cardiff to drum for us, teach us some Welsh in her spare time, and help lead worship for the Sunday service. We met a joyful, diverse congregation who sang incredibly loud to every song we played! I’ll never forget how their voices overpowered the monitors.

In the body of Christ we are challenged to live out the task, whatever it is, faithfully. So often we give in to the desire to see instant results. If we don’t, we move on to something else. I want to be faithful in my own life, ministry and anything God puts in front of me to do. I know it will mean sacrifice and courage, especially when the immediate results are not there.

Jesus’ public ministry got him attention, but he never sought attention. His entire life was about glorifying God.

In whatever you are called to, even if it seems small, pursue a faithful journey. Applause and popularity are less important than longevity. Know that God has given you the grace to see it through, however long it takes.